Considered a Rhineland mystic, St. Hildegard is one of the 4 women doctors of the Catholic church—A German Benedictine abbess, artist, writer, composer, medicinal healer, philosopher, Christian mystic, visionary, and polymath. She lived during the horrific Black plague, religious inquisitions and social diseases of the Medieval age, when life was short and poor (25 years average). Most of the population were peasants, locked into feudal power structures of wealth and starvation. Even so, Hildegard lived to the ripe old age of 80 years and beyond. The decline and collapse of the Imperial Roman Western Empire during the Medieval Age, sowed the seeds for the blossoming of the Renaissance.

“Speak and write!” the voice from Heaven commanded.

Hildegard was forty-three years old when her visions finally became so insistent that she could no longer contain the secret she had harbored since early childhood: the Holy One, identifying itself as “the Living Light,” spoke to her. It spoke to her regularly, its voice emerging from a swirl of spiraling light. . . .

“Oh mortal, who receives these things not in the turbulence of deception but in the purity of simplicity for making plain the things that are hidden,” the Holy One said that day in 1141, “write what you see and hear.”

It was not doubt that held her back, Hildegard assures us. The voice carried such authority that she was convinced its origin was divine. It was not a case of low self-esteem either, she says, nor a matter of worrying what other people might think. It was, she tells us, simple humility. Who was she, an uneducated woman, to proclaim God’s message to humanity? . . .

[But] the more she resisted, the more seriously ill she became. “Until at last,” she writes in her introduction to the Scivias, the first chronicle of her visions, “compelled by many infirmities . . . I set my hand to writing . . . and rose from my sickness with renewed strength.”. . .

Speak out, Hildegard says. And when you do, when you recognize that inner voice as the voice of God and say what it has taught you, the sickness in your heart will melt away. The fatigue you have lived with for so long that you did not even notice how weary you were will lift. Your voice will ring out with such clarity and beauty that you will not be able to stop singing. To speak your truth, Hildegard teaches us, is to praise God.

Author, spiritual teacher, friend, and fellow New Mexican Mirabai Starr offers us a bit of the story of Hildegard’s life with implications for our own lives today.

What are you called to give voice to in these times of collapse, ruin and the hope for a life affirming humanity? 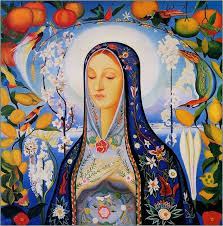