Today something lovely arrived at my door.

Thanks to the U.S. Postal Service carrier, who walks through rain, 100 degree temps and snow.

Someone gifted me with a treasure. The work of their hands.

The tag reads, “As I wove this towel, I imagined mounds of ground cayenne, paprika and turmeric, creating a feast for the eyes as well as the palate…please use me, and not just on special occasion. I will be happier with a few stains than tucked away in a drawer. I was woven to add beauty and sacredness to those ordinary tasks that comprise so much of your life, to connect you with yourself and with something greater” https://www.whimsyandtea.com

And thank you U.S. Postal Service and your agents who hand deliver gifts each day to our doors—from medicine to bees to hand towels to bills and letters.

Here’s an ode, a prayer to this 300+ year old beloved and taken-for-granted institution and all the postal carriers who bring it to life daily. These days call for honoring the mundane, more than ever…

This is a non-partisan prayer
about something as mundane as mail,
as gentle as the swish of a letter
falling to the floor by the door.
This is a prayer
for stamps and stamp collectors,
the quietest of hobbies;
for pen-pals and thank you card writers,
for grandparents who always remember your birthday,
and love letters from the war,
kept at the bottom of a drawer.
This is a prayer
for the quiet dignity of the blue mailbox
standing like a sentinel on the corner,
portal to anywhere, for just the cost of a stamp.
Walking to the mailbox
down the block and around the corner
was my daughter’s first independent adventure,
the responsibility of an envelope,
addressed and ready in her small, serious hand.
Her nervous departure from the front door, alone,
and her triumphant return minutes later.
“I did it mama, I mailed the letter all by myself!”
Do you remember, the wonder of it?
Dropping a letter in one place,
mouth of the box swinging open and shut,
eating the envelope like cookie monster,
only to have that same letter reappear, days later,
in another place?
It is a mundane miracle.
When I was a teenager, learning how to drive
my mother set up garbage cans in front of our house
so I could practice parallel parking.
Our mailman, swinging by from house to house
stopped with a big smile to shout,
“turn the wheel! Cut it hard, that’s right, now straighten it out!”
His brown arm waving in circles
as we both grinned with the joy of it.
A simple thing, feeling like part of something –
a community, maybe – where mail carriers
and teenage drivers were all part of the same world.
I remember how quickly he would run up and down the front steps, even in the hot and humid summer.
“Neither snow nor rain nor heat nor gloom of night stays these couriers from the swift completion of their appointed rounds.”
This is a prayer for the carriers on their routes
The clerk at the window
The backroom sorters and the delivery truck drivers
Moving mountains one piece at a time.
Passing along that which was entrusted to them:
Electric bills,
bank statements,
birthday cards
…ballots.
Hear us, God of the taken-for-granted things,
Divine mystery of overnight delivery,
Spirit of Civic Life,
may we preserve this minor magic
of letter and stamp, scale and package,
sorting machine and postbox,
so that our children do not shake their heads
and wonder at all the things we allowed to slip away.
– Rev. Julia Hamilton

I honor you, trusty, weather beaten, graffiti-ed blue postal boxes. And your hard working messengers. I stand with you. 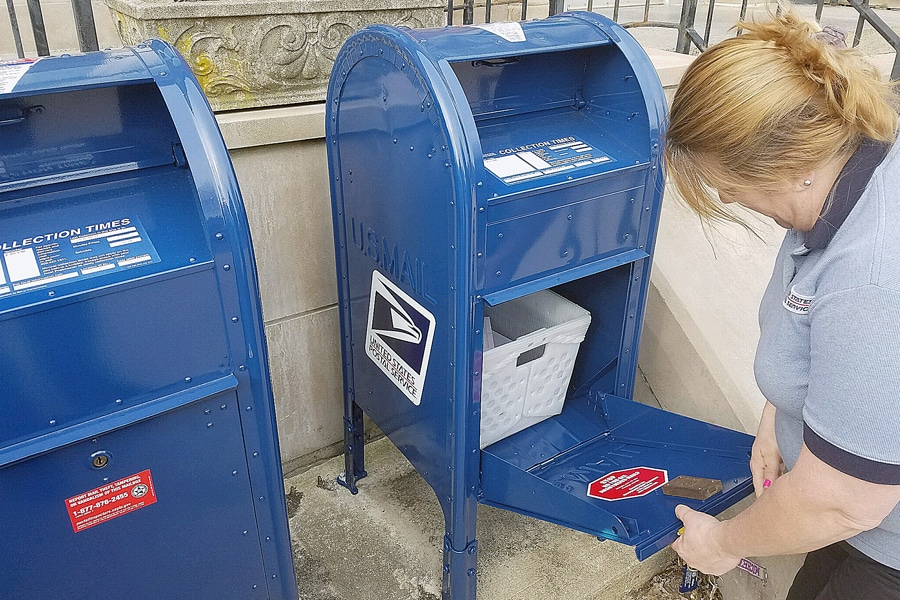 One thought on “Blessing the Daily Mundane”